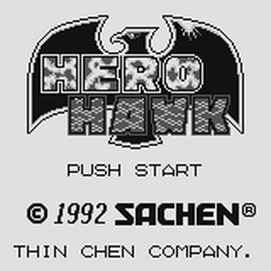 ​
Release date: 1992
While they continue to hold something of a comical reputation among the retro-gaming community for their audacious plagiarism, unconventional naming of titles and history of unauthorized NES and Game Boy releases, Sachen, despite overseeing a handful of Supervision stinkers, have also had a hand in producing some of the best titles on the system.

The latter usually occurs when a developer plays to the strengths of the unit, or, more accurately, does all that it can to minimize the Supervision's obvious and well-documented weaknesses. Thankfully, Hero Hawk sticks to the latter formula and does not attempt to move into territory that the Supervision hardware cannot cope with.

As with PoPo Team, Sachen has wisely restricted the gameplay to a single screen affair (or rather a series of interlocking screens on a larger map), this combined with the stealth based tactical gameplay means that the Supervision has no problem rendering the action without it becoming a blurry, ghosting mess.

The plagiarism is still there, however, as Hero Hawk is unquestionably a rip-off of Sega's Crackdown. This isn't necessarily a bad thing, as Crackdown was a well regarded title and this clone makes an admirable stab at bringing it to the under-powered handheld.
(left) Each mission is pre-empted by this little computer cut-scene, although the objective is always the same. Plant bombs and then leg it!
(middle) The black hawks must be touched to plant the dynamite, however this minefield will take precision.
(right) A mission map will make navigating each stage easier but it must first be looted from within the level itself.
As mentioned, while Crackdown was a scrolling affair with a small on-screen play area, Hero Hawk uses a flip screen format based over three fairly large and graphically different stages. Everything is bigger and bolder on the Supervision, if less detailed than in Sega's original. Your job as the lone agent is to infiltrate these areas and plant explosives throughout each compound. Each area contains a number of black hawk symbols which your secret agent must walk over to plant the charges and a variety of bad guys from enemy soldiers to ground based sentry guns and mines to avoid or destroy on your way. Once every charge has been planted, then the exit to the level will open and you can take on that area's boss.
While the pea shooter you are equipped with is annoyingly weak you are also given three screen clearing bombs per stage, with more collectible from the various crates you will find scattered around the stages. Strategy and mapping will play a big part in successfully completing what is a challenging game. Thankfully a map can be found and located on each level (by finding a hidden Supervision console) and can then be accessed to make navigation easier.

The slow pacing of Hero Hawk and its protagonist can initially seem off-putting, until you realize that its purpose is twofold. The relatively slow moving action keeps things running well on the Supervision's poor quality architecture, but it also works in a game that quickly reveals its key to be stealth and tactical plotting rather than gung-ho warfare. While taking a bullet won't mean the instant loss of life you'd suffer in Crackdown, Hero Hawk's life-bar will quickly deplete and you'll burn through the seven continues offered if you simply charge baddies blasting your way through the games maze without thought. Survival will, instead, depend far more on nipping out from behind a corner to shoot, before dodging back again to avoid return fire. In some cases, smart-bombing a room is the smarter option, although the re-spawning enemies that return each time you re-enter a room will mean these also need to be carefully rationed for the most useful situation.  At the end of each stage a boss is waiting, which makes the management of such resources more important than it otherwise might be as these big-bads are no pushover.

​Graphically, this is another pleasing effort for Sachen on the Supervision, with nice cutscenes, a strong variety in backgrounds between stages and gameplay that is thankfully free from ghosting or blur. While the music does alternate between stages, it is the usual minimalist effort that makes you wish for the option to turn it off.
Hero Hawk does a good job at simplifying Crackdown's core concept and turning it into a decent Supervision effort and one of the system's better titles. Sensible design choices, a well balanced difficulty curve and a little bit of care and detail with the programming prove once again that the Supervision was more than capable of producing playable, fun titles when programmed to avoid it's weaknesses.

It's not going to be taking on Metal Gear any time soon but it's a solid simplification of a superior title that should find a home in any Supervision collection.
Score 7/10
Back to SuperVision