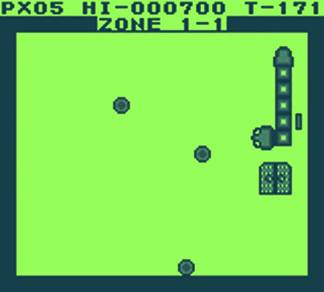 ​RELEASE DATE: 1993
Poor old King Roy (yes, he really is called King Roy. No, it's not a mistranslation of 'boy', as we'd always suspected). He's sitting on his throne minding his own business when a woman enters his court and, after taking an ungodly amount of time to make her way to down his absurdly long chamber to his throne, proceeds to turn him into a snake.

Why? So that Sachen have an excuse to take the popular 90's mobile game 'Snake' and turn it into a surprisingly good puzzler for the Mega Duck.

As anyone who ever owned an early Nokia mobile phone will already know, Snake finds you controlling the titular slitherer from a top down perspective. As folk of that era may remember, your task in that game was to eat as many items of food as you could while avoiding obstacles, the biggest one being your increasingly expanding body which grew by one segment for every piece of food eaten.

Snake Roy takes this basic premise and drops it into the confines of a maze game. There are no actual enemies here, just the tightly wound corridors that threaten to spell disaster upon collision. Each stage has a number of glowing discs that must be eaten by your cursed king as well as bonus coins that amp up your score and power-ups that do things like reducing your size or speeding you up. Once all the discs are collected a door will open and you can escape the level.

As with many Sachen games, the game is split into worlds filled with a ridiculous number of stages (9 in each plus a coin munching bonus round). Fortunately there is a password system that can be employed as well as unlimited continues (complete with a cute cut-scene of a dungeon door opening. Even better, these passwords are only 3 digits in length so can be easily committed to memory as well as promptly re-entered.

As stages progress then Snake Roy's dungeons will begin to test your grey matter as tactics come into play about which discs to collect first. Tight areas must be traversed before you grow too big to reach them and there is some trial and error and logical thinking involved in figuring out the correct route in advance.

Snake Roy does a good job with its interpretations of various bits of public domain music that feel appropriately regal and fitting for the story. it's precise controls actually work well with the Duck's four button d-pad and it always feels fair and accurate, which is always vital with a game like Snake.

Snake Roy is a surprisingly good puzzler that provides a nice twist on what was originally a simplistic gobble-em-up. it retains the one-more go factor of the original Nokia phone game while adding a polished feel and cerebral challenge not present in the original.

Plus, if you don't want to own a game with THAT cover art, you're probably reading the wrong website!