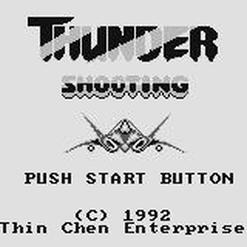 Release date: 1992
Everything starts off fairly promisingly as you boot up Thunder Shooting. A well designed title screen rolls into a neat little cut-scene revealing an original take on the well worn shoot-em up trope of the lone fighter facing impossible odds.
This time you're not a lone hero but a series of crafts trying to transport refugees from a dying overpopulated planet to a legendary planet named 'The Earth'.
It's an amusing twist and, in a future where Donald Trump's presidency has presumably had a permanent effect on mankind's psyche, the Earth is, unsurprisingly, not rolling out the red carpet for your little ships of hope.
A further flair for presentation follows with a detailed star-map allowing you to choose one of the game's four stages to start your mission in.

You push select to cycle through them and hit start to begin....Which is where everything falls spectacularly apart.

Thunder Shooting's intro sequence may well be pretty neat. Thunder Shooting the game is abysmal and all but unplayable, largely due, once again, to the horrific ghosting, flicker and frame-rate issues that beset the Supervision hardware.

Your craft appears in the middle of a well drawn but spasmodically flickering and jerky enemy Armada that zooms around the screen at speeds so fast that they are nearly impossible to avoid or, at times, see. You'll likely die within seconds and realise for the first time that the game intends to send you back to the beginning of the level every time you do this.

While this might be considered a challenge in something like Super R-Type, it's increasingly annoying in a game that relies so heavily on luck and poor hit detection. Enemies will often make their prescence known by simply appearing in the middle of the screen. Materialising directly into the same spot occupied by your craft. A brilliant tactical maneuvre it has to be said, but not one that is even remotely fun to play against.

​
The presence of an original story in the introduction cut-scene and a nifty looking level select screen show a promise that never materialises itself once gamplay begins.
Things aren't any more impressive sonically as the same awful beepy theme tune plays relentlessly on each of the games small and unvaried four stages. Perhaps this is why Sachen chose the B button for shooting as the design of most Supervision models means that holding it down for autofire leads to the player inadvertently blocking and muting the system's external speaker! Don't worry though, you won't be missing any meaty explosions or the rapid fire ping of your laser cannons, because Sachen forgot to put any in.  That's right, someone designed a shooter with no sound effects whatsoever. As you can imagine, blasting the enemy here is about as satisfying as swinging futiley at the school bully while he facepalms you and kicks you in the bollocks.
Perhaps mercifully the stages are short and there is at least a boss to tackle at the end of each one. However the lack of continues and ridiculously unfair gameplay mean that the level select is probably the only way you would experience them all, not that they are any different from one another, as one blank starfield full of spaceships looks pretty much like any other.
There are powerups to be had in the game and, perhaps in a nod to the game's difficulty, these are not lost, Gradius style, with a death. However finding them all is unlikely given that the average game of Thunder Shooting will last approximately 30 seconds.
The beginning of stage 1 and its end boss blurring into view. The first level is actually something of a cakewalk once you adjust to all of the ghosting, flicker, framerate problems, etc.

Once again, we must credit Sachen for their artistic flair. Sprites look clean and detailed and the little touches like the level select screen and an effort to add a story demonstrate that they had some competent players in some areas. Unfortunately the abysmal gameplay, hampered by the developers failure to find workarounds for the Supervision's limitations render what would probably have already been an unremarkeable shooter into a largely unplayable mess.

Much like the doomed crafts of its protagonists, Thunder Shooting might have found hope in another system, but it was never going to survive in Watara's Obsolete World.

​See what we did there.

Score 3/10
Back to SuperVision