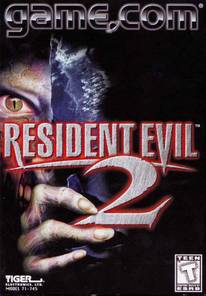 Release date: 1997
You have to hand it to Tiger, if there was one thing they were never slouches at, either with the Game com or their early series of LCD handhelds, it was obtaining the most marketable licenses of the day for products that couldn't hope to accurately do them justice.

The Game Com gets a LOT of stick online for this, sometimes fairly, when it comes to atrocious "ports" like Fighters Megamix,﻿ sometimes not so fairly when it comes to more admirably doomed efforts doomed such as Sonic Jam. The uniting factor in all of these games, whether you were able to enjoy them for what they were or not, seems to be the rallying cry of "worst version ever!".

It's a fair cop. Admittedly, you'd be hard pushed to find a worse version of Resident Evil 2 than the one we're about to discuss (although Tiger did release a separate 99x handheld that might lay claim to that title). However, as we've seen with Sonic Jam, once you filter out all the angry youtube fanboys and try to ask the simple question: "can I have fun with this?" The answer often surprises.

Firstly, let's begin by applauding the intention here. Rather than take the obvious route of using the license and name of Resi 2 to sell a mediocre platform game or top down 2d shooter, here we have an actual attempt to port the acclaimed sprawling survival horror to the chunky grey handheld IN FULL! The audacity and, in part what was achieved with this audacity, is nothing short of technically miraculous for the Game Com, a system that often seems to struggle with simple single screen affairs. However, in retrospect, the orihinal games slow pacing (these are zombies after all) and mostly pre-rendered backgrounds stands it in good stead on a system whose main issue comes when having to render fast moving sprites.

First let's get out of the way the things that shouldn't be surprising: The omissions.

For fairly obvious technical and space reasons, there are no cut-scenes and indeed no other human characters to interact with in the game. This means that traditional title screen voice sample aside, one of the Game Com's best features (it's digitized speech) isn't really used and all the cheesy dialogue of the original games goes out of the window in favour of a "lone survivor" style mission for Leon to attempt.
Speaking of Leon, he really is alone in this version of the game. No Claire Redfield mission here, folks. Both of these understandably technical omissions seem to have attracted huge criticism online, whereas they are perfectly reasonable in the context of the port and the system it is appearing on. There would have been no way to fit these onto a Game Com cart, especially in what can be presumed to be the usual tiny development window that was common for the system's releases. Anyone angry about this is kidding themselves.

There is also no music in the game, which again has been a point of concern online, however if you've ever heard the Game Com's attempt to play music you will understand why this was actually a positive thing. Silence (punctuated by the groans of the undead and other sound effects) also isn't an altogether bad thing in a game where you are trying to build a sense of continual suspense and dread.

What remains of the story is told via the original game's file system. Unfortunately, for unknown reasons, it's a rather broken version of this. In the original game you collected these files at various points throughout the game, filling in lore and background details about the plot. While the instruction manual references collecting them and  what appear to be file-like graphical artifacts remain dotted around the game, for some reason you begin the game already in possession of all the files and are free to read them out of sequence.
​This would appear to indicate a rushed release for the game with the developer being unable to properly implement the file system as intended. While it's better to have them than not, it makes sorting through them for clues a bit of a hit and miss affair and kind of ruins the flow of what remains of the story.

​Puzzles have also been simplified to basic block pushing, item using and searching mechanics. While, again, this seems to have annoyed hardcore fans, it makes sense in the context of the system's limitations. Unfortunately a handful of puzzles such as burning the painting with Leon's lighter or the method for disposing one memorable boss (yes, bosses made the cut!) can be tricky to figure out without familiarity with the original. (similarly, over-familiarity with the original may throw you for a loop given that the full map has been replicated here in spite of the now redundant nature of some rooms).
​
So far, so much of a damp squib, but now let's get onto why we initially praised the game as a technical miracle. You see, for all the omissions, it's what Resident Evil 2 manages to put in that really matters here and fortunately it does a lot of very impressive things indeed with the hardware.

The pseudo 3d playfield of the original is transferred into a 2d plane with a depth of movement in and out of the screen that gives the illusion of moving in three dimensions. Leon can spin on the spot with the traditional tank based controls and move up down to the left or to the right, pretty much anywhere on the screen with enemies following similar patterns (often comically lumbering into line like a pro wrestler getting in position for a finishing move!) and bullets able to be fired in any of these four directions.
The attempt to redraw the original game's map is admirable and, in general, a fantastic job has been done to bring all the original locations from the flaming streets of the intro, to the police station, through to the sewers and laboratory are all there and presented in fantastic detail.  The enemy sprites also look fantastic, with a variety of zombie cops to blast at alongside lickers, zombie dogs, giant spiders and screen filling mutants. While these enemies don't have the window bursting jumpscare factors of the original game, it's still mildly terrifying to wander onto a new screen and find one lurching towards you!
A special mention  here must be made to the giant alligator from the original game, who not only appears in the Game Com port, but must be defeated with the same puzzle based mechanic as the original. That mini-boss alone almost makes up for the lack of other set-pieces.

Unfortunately, all of this graphical splendour and attention to detail does come with a downside. As usual, with the Game Com, the display can be an issue. Resident Evil 2 involves a lot of backtracking and this can be problematic on a game with a monochrome display where the perspective can be confusing and many rooms look samey when rendered in greyscale.  It's very easy to get lost in this vast mono city and the game's sheer size (including multiple paths to reach the end) can frustrate without much of a story to keep you going and provide a sense of direction. Fortunately the game does include the map and this can be used as a point of reference brought up from within the main menu. Saving via the game's ubiquitous typewriters is also possible (although only one file at a time) and the game's famous magical storage boxes are still waiting to be filled with your first aid sprays, keys and other knick knacks. Even despite the help the game gives you in this area, if you're not a RE2 expert then you may find yourself scuppered for a sense of direction, without a handy FAQ to hand.

Sonically, despite the lack of music, the effects are generally on point, with weapon sounds being meaty and satisfying, the zombie groans troublesome and the skittering of the bigger enemies unnerving. We're not sure why Leon's death wail sounds like he's underwater but it's a minor complaint.

​The gameplay is more of a mixed bag. While the first 20% and last 20% of the game are more about blasting zombies collecting ammo and pressing on, the middle portion of the game can frustrate with its backtracking, unclear puzzles and map that could have done with a few less unnecessary rooms. While many Youtuber's seem to raise the controls as a problem, they are pretty realistic to what the original RE2 offered. Yes, you need to press a different button to draw your weapon than you do to fire it. That was the case in the PSX version too. Get over it Youtube!

In terms of challenge, Resident Evil 2 offers a meaty one. It took us just under 4 hours of saved game time to beat the quest but something closer to ten in real time and accounting for deaths and restarts. Unfortunately the ending is rather underwhelming (in fact, it can be viewed in the instruction manual!) but the Game Com does save your best time in it's hi-score page once you beat the game so the option to try and beat it does exist. Just don't expect to unlock Tofu...or even Claire!

​Resident Evil 2 for the Game Com is something of a mixed bag of ambition colliding with reality. On the one hand it's a staggering technical achievement and the sort of thing people would rave about if it were a homebrew effort.  On the other hand it's missing a lot of the atmosphere and story that drew people to the game in the first place. It can be great fun in places and a bit of a frustrating lesson in cartography in others.

One thing was clear to me after polishing off the Tyrant for the first time: it's one of the best, if not THE best offering on the Game Com and good fun in it's own right.  Like the zombies that inhabit it's world, it may be a slow paced, sometimes aimless shadow of the real thing, but the spirit of the franchise is alive in there somewhere and if you can weather the frustration of its puzzles and don't mind a less story driven chunk of survival horror, it will probably be the game that justifies your purchase of Tiger's doomed handheld.