With expensive and often difficult to source games, the Gamate's library has always been notoriously difficult to explore.
​ A2 Heaven's solution is here...

Full System Review
A2Heaven is on a roll right now.

We've talked previously about our appreciation for its 2019 release of the Watara Supervision Flashcart and earlier this year it gave us more cause for celebration by releasing a similar device for the Megaduck!
​
The genius of these carts was not just in their sleek design and attention to detail but it how they effectively cut out the middle man for anyone with a passing interest in these weird old handhelds, offering more or less the full library of both systems on single affordable carts.

In the case of the Game Boy's other forgotten competitor, the Bit Corp Gamate, the justification for such a cartridge is arguably even stronger. Gamate games are notoriously hard to come by, usually found online exclusively from Ebayers based in Italy (where the system seems to have enjoyed the most popularity) and are not exactly on the cheap side. Given the dubious quality of most, it would take a hardened collector to attempt to assemble them all.

The Gamate Multi is the first such cart from A2 Heaven that, sadly, doesn't manage to assemble the Full System lineup (For technical reasons, the Supervision Multi was missing only one game from that system's original lineup.)
There are a couple of reasons for this. Firstly, nobody seems entirely sure how many games were released for the Gamate. Common wisdom seems to point to 70 but at least four of these are completely unknown and the existence of several others seems to be little more than urban legend.

That being said, with 61 titles built in, you can be sure that A2 Heaven have made every effort to collate everything that has currently been dumped and preserved as of the carts general release. As usual, should other finds be made in future, then these can be added to the cart by the flashable user-interface. 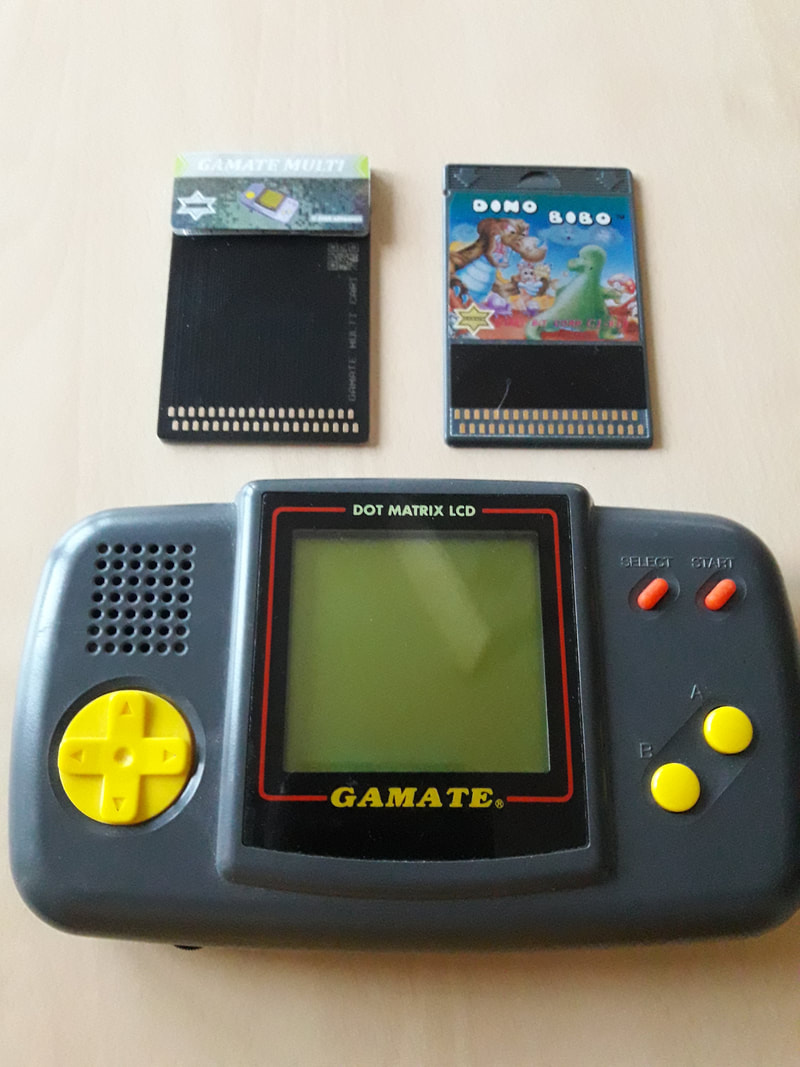 The Mighty Gamate and above it for comparison the Multi (left) and an original Gamate card (right).
Let's begin by taking a look at what you get with the cart out of the box:
While the latter option is as intriguing as ever from a homebrew point of view this review will focus on the out of the box usefulness.

The detail in the design

Eschewing the usual cartridge format of the time, the original Gamate games came on little cards that will look instantly familiar to users of the Sega Master System or PC Engine. From the moment you slip it out of the little leather wallet (embossed with the Gamate/超级神童 Super Child Prodigy logo) the quality of design is evident. A sleek black circuitboard is topped by a mosaic style logo and affixed to a clear plastic backing with the original gibberish instructions about not touching golden fingers lovingly recreated.
The little protective leather wallet with embossed logo is already more expense than was spared on the original clear plastic affairs Gamate games originally arrived in.

Once again we are treated to the now familiar coloured LED lightshow on the back of the cart as the traditional Bit Corp logo transitions into a neat animation of a Gamate with a cart falling into the slot as the menu appears.

Another jaunty little ditty, this time a rendition of The Entertainer, plays but can be turned off with a push of B if it isn't your thing.

Again you have the usual attention to detail in the menu here with info on size, year published and developer sitting next to a screenshot of each game as you scroll through it. It's notable here just how incomplete the data on this system still remains, with several games identified as being released in '199?'.

Having so many games to navigate can be a little time consuming, although you can press left or right to skip to the beginning or end of the alphabetical list and find your game. If we could suggest an improvement here it would be a way to skip via page in the way the GB Boy Colour allows, as finding a game this way can still be quite time consuming.

Once again there is space for a user game to be added via the separate device that can be attached via USB to the top of the cart, however this time, sadly, there is no bonus A2 Heaven original so selecting this option just freezes the system.

​What is there, however, rather makes up for that.

A journey into strange new worlds

Having previously been limited to the handful of carts we were able to source at reasonable prices, it was amazing to see the variety and indeed complexity of many of the later, more obscure releases for the system, many of which (as with the Supervision's Journey to West) have become almost legendary among cart collectors. Whether it be scrolling beat-em-ups like Bao Quing Tian, the bizarre (and English translated) adventure game One Million Whys (which seems to involve a dog tracking down it's owner while answering bizarrely complex questions on GCSE science topics) there are some real original oddities to be found among all of the clones.

And goodness are there a lot of clones! This was the second discovery this cart led us too, we spotted clones of Castle of Illusion (Punk Boy), Fist of the North Star (Fist of Thunder), Adventure Island (Kiki Island) and Gradius (Mars Voyage) among others. We didn't realise the plagiarism within the original Gamate lineup was quite this strong until spending an evening or so playing through these and having fun discovering what the system had to offer.

Of course "fun" is a relative term.

This is where a multicart like this will be hit or miss as an entertainment product, because, despite all of that variety, the Gamate remains a horrible system to actually try to play, with possibly the worst ghosting of any Game Boy competitor, and lacking the size and visibility of the Supervision it really is astonishingly hard to make out what is going on in the vast majority of games.

Of course, if you're interested in buying a multi-cart for the system then you already know that and you certainly won't find a cheaper or easier way to explore the system's obsolete archives than with this product.
Scrolling beat-em-ups and weird adventure games are some of the experiences you're otherwise unlikely to find on Ebay!
Rare games like bizarre science adventure 'One Million Whys' (left) feature full English translations along with the original Chinese option. More familiar fare can be found in the form of shameless clones like Mars Voyage (right) which adds extra challenge to the original Gradius concept by making it almost impossible to see your ship moving!

The Gamate multi is the latest in a series of products answering the prayers of fans of these niche systems. Short of a few minor suggestions (like perhaps finding a way to shortcut back to the menu) the multi is your best bet for exploring what the Gamate has to offer without caving in to those eBay prices.
It's another finely made product and deserving of your support as A2 Heaven continues to bring these dead systems back from the brink and inject them with an extra life.

Oh, and if you think it it can't get more obscure than the Gamate, did we mention they also have a Game Master multi!? That one is up for review next!
To purchase A2 Heaven's many unique and interesting products visit their website at www.a2heaven.com
Back to the Off Licence