Looking for an all in one solution for the Game Boy's most infamous competitor? It's finally here and it's predictably fantastic!

Full System Review
When Bulgarian outfit A2Heaven launched it's fantastic Watara Supervision Flashcart back in 2019 it gave even Shenmue 3 a run for it's money in terms of the year's most unlikely resurrection!
​
As our review pointed out, it managed to create a one-stop shop cartridge for an obsolete system that not only gave users access to the full official library but crammed in so much extra detail as to arguably be a higher quality product than anything Watara themselves had originally put out.

Thankfully A2Heaven hasn't been resting on it's laurels and new multis are now on the way for other equally obscure systems! We were lucky enough to be sent test copies of the next three carts to appear: The Mega Duck, Game Master and Gamate and where better to begin than with a review of the multi that brings new life to the system that kickstarted our own love of obsolete handhelds: The Mega Duck!

The cart and instruction manual: The usual attention to detail is all there.
First of all let's look at what you will get with the finished product:
Once again, technical luddites that we are, we can't talk too heavily about the flashing/programming side so the following review will focus on what the device can offer the user out of the box.

An eye for detail

Replicating the shape and form factor (right down to the exposed contacts) of the original Megaduck carts, the multi immediately draws your attention visually.
With the board sandwiched between smoothly designed white acrylic and embossed with a colourful logo that recalls the packaging of the original French releases, everything about it is as professional looking as the Supervision multi of 2019. The attention to detail begins with the logo and even extends to the use of MD038 for those who like to track cartridge serial numbers.
Two alternate designs were also showcased and A2 Heaven plans to possibly include these with sold units as bonus stickers that can be applied to original Megaduck shells, with the cart’s PCB designed to fit an original Megaduck cartridge shell should you prefer uniformity.
Again, the attention to detail and little touches here are incredible.
As with the Supervision multi, coloured LED's light up the back of the device as it boots into the menu for no other reason that because they can!

Booting up the system sees an impressive startup screen with an animated A2 Heaven logo transitioning into a render of the Megaduck and then drops the user into the menu where we are greeted by a jaunty little tune, apparently converted from Amiga mod files (which spoilsports can still disable with a press of the B button).

This time the menu itself hides several interesting points of note as a quick press of the select button will cycle through 4 different skins. This is a useful feature depending on the state of your own Megaduck’s screen. We found that being able to adjust to a simpler font on our scratched up Hartung model was particularly helpful.

As with the Supervision Multi’s menu, this is more than just a traditional list of games. Each title from the Mega Duck’s lineup of original releases is here and accompanied by a breakdown on it’s size, publisher and year of release. There is also a small screenshot of the game's title screen with, in a lovely touch, a little animated duck flying around it. Another easter egg is hidden here, as the duck can be controlled by a press of the d-pad and sent flapping in another direction! A2 Heaven told us that there were even plans to develop this further into a Duck Hunt style mini game if time allows. The mind boggles!

Perhaps the most exciting option is the final ‘User Game 0’ option where homebrew can be dumped and played.
Of course, this being an A2 Heaven project, that spot has already been filled as an extra present to the user. Pressing A will load up a full five level Breakout game called 'Brick Out' developed in-house. It’s a simple, if surprisingly polished, gesture but wonderful to see an example of Mega Duck homebrew at long last! Here’s hoping more will be coming as A2 Heaven indicated more spaces may be available on the finished release.

A range of different fonts and skins can be cycled through on the main menu to aid visability on the Mega Duck's ancient screen. 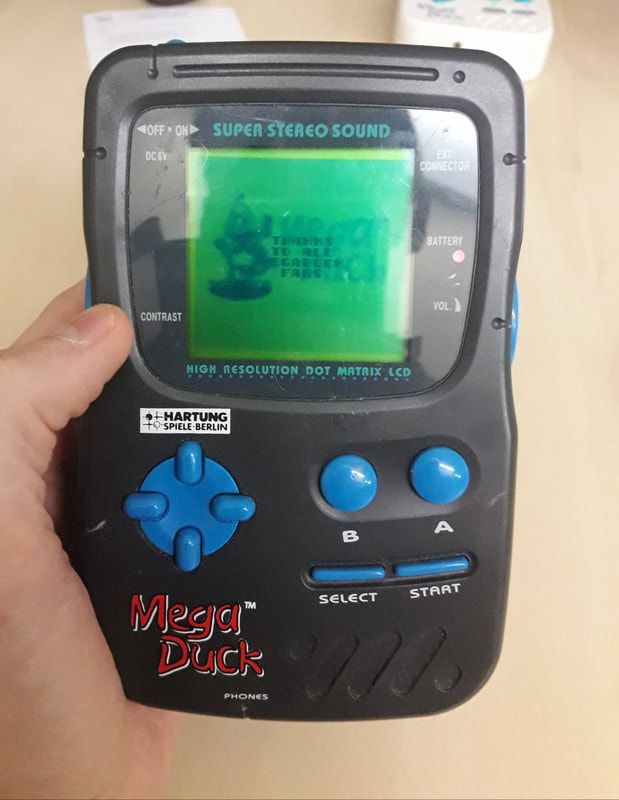 A credits roll can be accessed by pressing B on the menu to reveal this hidden message. Thank YOU A2 Heaven! 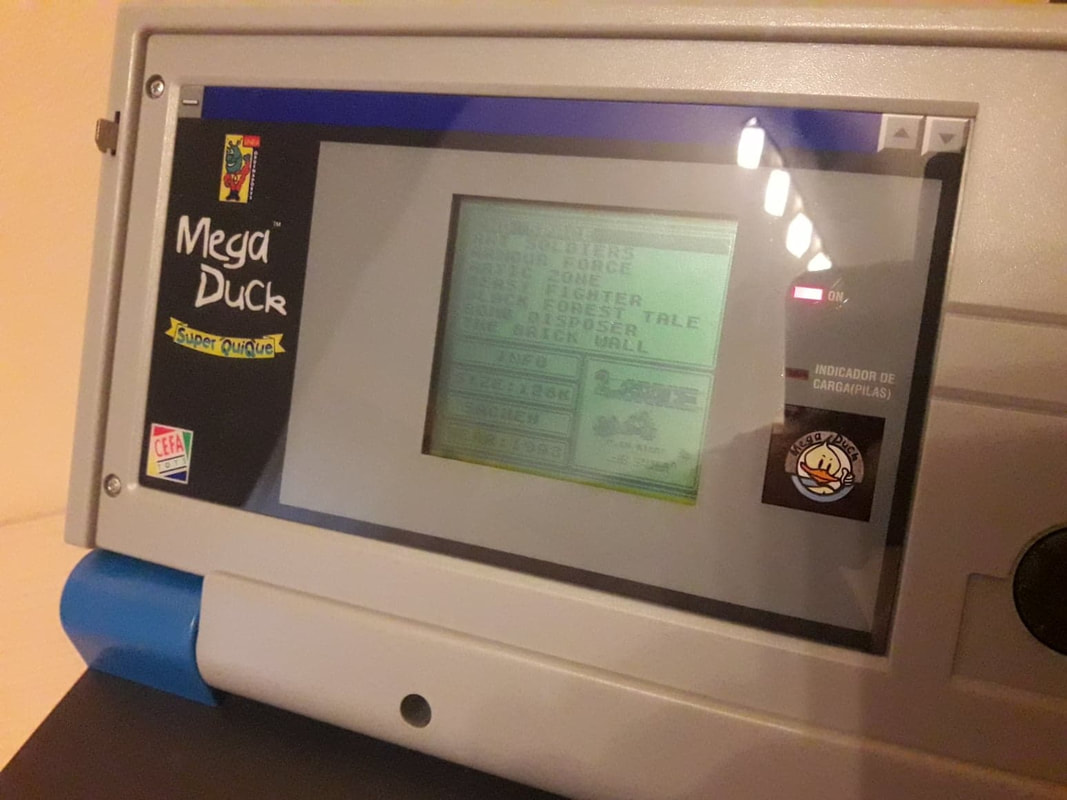 ...and yes, for those of you who own one, it also works perfectly (and sounds beautiful) on the Megaduck Lerncomputer/Super Quique models!

As with the previous Supervision Multi there really isn't anything negative to say about this. Sure we could maybe say that it would be nice to have a feature to quit back to the menu but that would be trivial complaining for the sake of it. What you have here is the latest in a series of minor miracles for fans of obsolete handhelds. With the Mega Duck the lineup is limited so you obviously won't be getting as many games here as you would on the Supervision multi or even on the forthcoming Gamate cart, however the quality of Sachen's output here was certainly higher in general, so much so that they ultimately ported the games to Game Boy.

And speaking of Gameboy, weren't there some "lost" Mega Duck serial numbers and some suspiciously non-Mega Duck releases that turned up on Sachen multicarts? Now wouldn't it be a thing if some clever fellow could port those back and get them up and running on the Mega Duck?

Let's just say for now that this may not be the last Mega Duck release we see from A2 Heaven yet. As their website says, they really do seem committed to making dreams come true...
To purchase A2 Heaven's many unique and interesting products visit their website at www.a2heaven.com
Back to the Off Licence