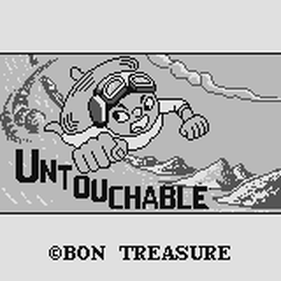 ​
Release date: 1992
"In the 24th century, a calamity struck as evil spirits, demons, and various monsters appeared from nowhere and started attacking humans. They have conquered many countries and enslaved the majority of the human race. You, our hero, are our last hope. Your mission: to defeat these unfriendly hosts and liberate our people from their tyrannical rule".

We've spoken before about how certain Supervision games feel as if they were programmed after a phonecall from someone poorly describing the source material over the telephone.
Untouchable exists in a similar world of disconnect, this time between art direction and gameplay. Everything about the game's art design, from the backdrops to the impressively surreal bosses, feels a touch above the usual bland blobs and strange sprites presented by most titles on the Supervision. Even the cover art looks reasonably attractive in comparison to the usual 'eight grader's first attempt at Cubism' style covers that the system usually churned out. Enemies are varied and interesting as is the main sprite: an interesting twist on the generic spaceships that usually inhabit these games.

Untouchable is a game that really wants you to like it...then undoes it all with some bizarre gameplay choices, non of which really mask the problem they are trying to conceal.

We'll say it right now: Untouchable could have been a solid shooter for a system that can't seem to get one right. The enemy patterns are well thought out and varied and it should have been fun to blast through them...except for some reason the developer has made the ridiculous decision to give them the average HP of an end of dungeon RPG boss!
With your ordinary pee shooter it takes a solid 6-7 hits to down even the most piddling of baddies, with some taking up to 10 and some seemingly being invincible. The Supervision, for once, does an impressive job of filling the screen with them without everything turning into a ghosty flickering mess, yet the seemingly near-indestructible nature of many is a baffling decision in gameplay that will frustrate and annoy the player time and again.
The game's graphics are fairly clear for a Supervision Shmup which makes its gameplay choices even more frustrating as this could have been a solid shooter without them. The number spewing clock monster from stage 3 (right) is one of a number of interesting graphical flourishes that shows attention to detail in the graphics department that was sadly lacking in game design.
The idea seems to have been to fuse a Mr. Heli style in-game shop with a Gradius style, don't lose your power-ups or things will get nails, mentality. Gradius, however, was still do-able without powerups. Untouchable is all but impossible without the extra firepower that colliding with the shop guy brings and even then it's a slog.

​With a fully powered up guy, the game does open up a little in terms of difficulty. What's then exposed is a very short experience that loops infinitely after the fourth stage. Nicely designed bosses and oddly themed stages (Graveyard, marine level, suburban home and forest) don't provide much replay value and it doesn't help that the game tries to disguise its shortness by spamming a ridiculous amount of on-screen enemies right before the final boss in an attempt to vanquish you. This relatively brief series of levels probably contributed to the decision to make every enemy so difficult to kill and thus ruin any sense of balance the game had, turning what would have been a short but fun shmup into an unnecessarily tough slog that still isn't that tough but also isn't much fun anymore either.

Sonically the game is one of the most atrocious dins we've heard the system produce, with what seems to be the protracted wail of a fire alarm masquerading as music where simple sound effects would have suited far better.

It's a shame that Untouchable couldn't live up to it's quirky art design. As it is, an obviously rushed development cycle and a desire to mask this with bi-polar difficulty spasms ultimately turn what could have been a neat pick up and play title into something destined to remain untouched.
Score 5/10
Back to SuperVision