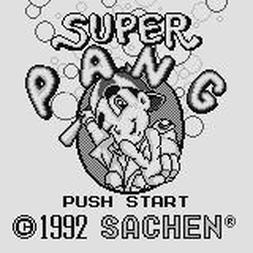 Release date: 1992
Arcade ports and familiar licenses are few and far between on the SuperVision, one of several reasons why the ill-fated handheld flopped its way into obscurity.
However, if one happened to be a developer looking to port an arcade hit to the system then you have to imagine a few questions might have gone through your mind when assessing the hardware and what it was capable of.
The Supervision is at it's best (still something of an oxymoron) when dealing with slow moving sprites that occupy a static space. It's horrible ghosting means that any developer even remotely familiar with the hardware should really have known better than to think "hey, you know what would be great? a game with dozens of deadly balls whizzing around so fast on screen that you can't actually see them!"

Of course, we're talking about notorious Taiwanese bootlegger Sachen here, a company that thought releasing games entitled "Pile Wonder" and "Worm Visitor" would get sales rolling in for the rival Mega Duck system when they would, more than likely, sound better on a tub of rectal ointment.

Whether or not Super Pang is actually an officially licensed port of the Mitchell Corporation's 1989 arcade hit, or whether it it is simply a clone so cheeky as to not even disguise its name is certainly up for debate given Sachen's history. What can, at least, be said of the developer is that they are more than capable, on their day, of knocking out fairly playable titles for the obscure systems they seemed to favour supporting.

Indeed Super Pang was probably a really good game if it was played on the computer used to code it. Modern emulation is probably what has earned it the title of one of the Supervision's better efforts. unfortunately, here at Obsolete Worlds, we only deal with reviewing software on it's original hardware (even if screenshots do need to be pulled from emulators to be able to see them at all) and this is why it pains us to report that Super Pang is an unplayable, often un-viewable mess.

The core of the classic game is there (if reduced here to a solo player experience). Your little man must fire his gun up at bubbles, popping them to create smaller and smaller iterations until all have been cleared (and until the level's bubble bar is filled) after which he moves on to another stage with a different formation.

Powerups can be collected to have transformative effects on your gun, changing your weapon to a permanent chain or a BB gun and background graphics display various places from around the world such as the Taj Mahal as you move between stages. Music chirps along at a level relatively inoffensive enough for the SuperVision, even if the sound of the gun is grating.
The crazy high number of lives and continues that the game throws at you seems to be almost an apology for the impossible to see graphical effect of the moving balls.
You are given a whopping seven lives and seven continues to begin your assault on an unknown, possibly infinite (possibly incomplete, knowing Sachen) number of stages...and the reason soon becomes apparent.

You cannot see a bloody thing that is going on.

No this isn't the usual Youtube exageration where someone talks about the ball blurring in Crystball. In Crystball there is, ordinarily only one ball to spot and it can be tracked easily enough even with the SuperVision's irritating ghosting. On the contrary, the first time you pop a bubble in Super Pang you might as well strap on a blindfold, as the resulting explosion of bubbles simply cascades into a blinking untrackable mess that relies on sheer luck or guesswork to eliminate.

It really is a case of the hardware destroying any good intentions of the developer. Playing Super Pang on the SuperVision is akin to ordering lobster at a restaurant and being served a microwaved prawn instead... then finding out that every time you try to skewer the prawn with your fork it jumps halfway across your plate. It's a supreme exercise in frustration as the system's horrible ghosting and the extremely low frame rate of bubble animations means that you might as well be shooting at thin air and hoping to hit a particularly annoying ghost.

It's a shame as, on a more capable handheld system, such as the Mega Duck (another Sachen haunt), this really would have been the port people talk about. Instead it is one of the poorest examples in all of gaming of getting the best out of a system's capabilities.

SCORE: 3/10
Back to SuperVision