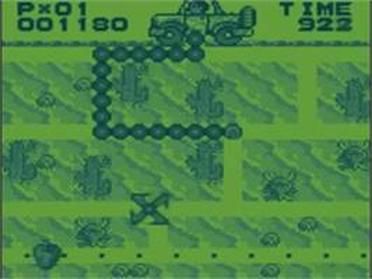 ​RELEASE DATE: 1993
Before we get into the details of the actual game, it's important to address that box art:

A man in a jeep, brandishing some sort of semi-automatic machine gun charges at a mutant dinosaur while being pursued by a pterodactyl. It's a wonderful example of the kind of thoroughly deceptive box art that publisher's loved to use to disguise a game that they thought nobody else would buy otherwise!

Which is a shame as Suleiman's Treasure is actually quite a good game, in its own right.

What you're actually getting here is a clone of the popular arcade game: Anteater. In fact, its not the only time that Sachen have cloned it for an obscure handheld as they also did a very good job with PoPo Team for the equally ill-fated Watara Supervision. That game turned out to be probably the best title for the system, so our hopes were high for Suleiman's Treasure.

Essentially, the premise is the same. Your little man sits in his jeep (two things that the cover art isn't lying about) and uses a mechanical arm to dig down under the sand with the aim being to navigate the tunnels and gobble up all the precious jewels (here represented as Pac-Man style dots) without coming into contact with any of the meanies that patrol them. In fact, the gobbling mouth at the end of your arm can also eat most of the meanies (bar a few who are fatal to the touch) but the true danger lies in these nefarious beasties touching the extended pipeline of your mechanical arm. If this happens then you will lose one of your lives. Lose all 3 and it's Game Over.

Fortunately you can reign your arm in at lighting pace at any point with a press of the 'A'button, while, in a neat touch not offered by PoPo Team, the 'B'button allows you to inch it back by a single pixel at a time, which is handy when precise and fast navigation is needed.

While a very similar game to PoPo Team, Suleiman's Treasure does feel like a harder iteration of the genre, something that is not made any easier by the Mega Duck's smaller screen and poorer visibility. Unlike the Supervision title it features in game music of a pseudo Egyptian theme but the sound effects are overall, less catchy and loveable than it's bigger brother.

While infinite continues are offered, Suleiman's Treasure can be brutal in its difficulty and some careful memorization and gaming of it's enemy patterns will be necessary to best it. (pro-tip: the game can only support so many sprites on screen at a time so keeping some alive while you follow them can gain you crucial ground before more can arrive).

Oddly, for a title that draws it's origins from an arcade game, a password option on the title screen exists that suggests enough progress will eventually be rewarded with a four digit code that should, in theory, make the game somewhat more beatable than it's Supervision equivalent.

Bizarrely though, despite it taking us up to an hour to get through to the game's ninth stage (level seven is a nightmare of timing!), we were never given a password by the game, so it's unclear when exactly they are issued. However, It is worth remembering that it is something of a Sachen trait to drag out 'Worlds' way beyond the norm of ordinary games, so this could be something that only appears after level 10.

​Suleiman's Treasure plays a good game of 'Ant-eater'. it's fair and infuriating without ever becoming frustrating but retains that 'one-more-go' feel and, while it is not quite graphically on par with Sachen's earlier effort for the Supervision, if you're looking for a dot eating maze game for a classic handheld, this does the job well.