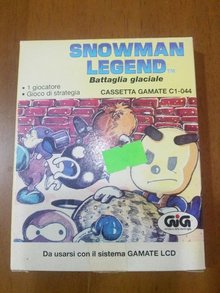 Release date: 1990
"In a cold night, many holes and sprites occur near Snowboy-Mace's garden. Mace actively fight them. But can he win? Come on Mace!"

Thus begins the scrolling intro to one of the Gamate's two winter themed game (Nightmare of Santa Claus being the other). It's a nice little bit of detail in a game that, while simple in premise, generally does hint at an increasing confidence among Bit Corp's developers, with similar flourishes shown throughout.

A seemingly original concept, albeit one that borrows from both Sokoban and Heiankyo Alien as the obvious sources of inspiration, Snowman Legend is a fun little puzzle game that tests your brain matter and yet is let down by some rather punishing difficulty and the complete absence of a level select or password system.

The aim of the game is to fill the holes that have appeared in the snowman's garden. Killing two birds with one stone you do this by pushing in the enemies that now roam around it. This involves first shooting the bad guys with a snowball at which point they are transformed into a larger, conveniently hole-shaped snowball. You must then grab onto the snowball and maneuver it to the hole in question, filling it up in the process. If the snowball touches another enemy en-route then it will melt leading to instant loss of one of the player's three lives and this is where a tactical element  enters the game as you must carefully plot your assault on the holes, pushing and pulling from all angles, often abandoning a snowball if another enemy hovers near. On later levels, virtually indestructible worms can further menace you, speeding up and giving chase when shot and generally needing to be lured away from a hole before you can return to it with a snowball to plug it up.​

High quality photographs of the back of the box! Still one of the only ways to get decent screenshots of Gamate games!
The game is no walk in the park and it can take some time to adjust to it's unforgiving difficulty but more inventive, trecherous levels await players who do manage to make it to the later screens. There is even a bonus game after every fifth stage that mimics the style of Space Invaders and can be used to accrue extra lives. These will be needed as the game's major flaw is that it's difficulty can ultimately lead to frustration. Imagine having to play Sokoban from stage 1 every single time and not having the ability to return to the level you were previously trying to crack. The frustration is mirrored here as, even though this is a much more entertaining game, each level is a mini-puzzle that requires tactics to beat it. Unfortunately the game is ultimately too slow paced to feel like there is much reward in playing through these earlier levels again each time, simply in the hope of edging a little further to the goal.

Graphically, the game has a nice clear, overhead display. Unfortunately, in typical Gamate style the sprites do tend to move a little jerkily, although not anywhere near as badly as in some other titles. Sound is the usual mixed bag, depending on whether you are using headphones (a pleasant enough dual audio melody) or the Gamate's external speaker (Kill it! Kill it with fire!).

Overall, Snowman Legend is a fairly fun puzzle title with a quirky uniqueness that make it one worth seeking out for the system. It's just a shame that it couldn't have offered a password system to offer players more of a feeling of progress and less a sense of frustration.