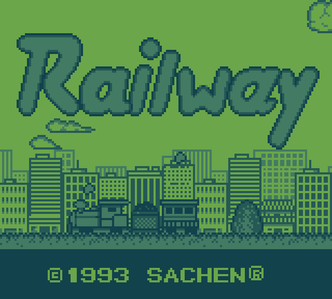 ​RELEASE DATE: 1993
First impressions can count for a lot.

This is probably why, after moving past the neat parallax scrolling title screen (Nice use of the Mega Duck's dual layer screen) and playing Railway for a few minutes I quickly turned it off and put it firmly at the 'later...much later' pile of unappealing games.

I was wrong to do so.

The fault probably lies somewhere between the deceptive simplicity of early levels as well as well as the brain's unecessary attempt to complicate things, because once you do invest some serious time in Sachen's locomotion based puzzler, you realise that it's actually a very competent and varied title that possibly challenges Ant Soldiers for the title of the system's best puzzle game.

The early stages are as uninspiring as the screenshots you'll see below but please don't make the mistake that I did of dismissing this simplicity as inherently linked to poor gameplay. For you seen, Railway has that crucial thing that we've bemoaned other Mega Duck puzzlers for lacking: Variety! Probably not something you were expecting from a game based around such tedious subject matter as building train tracks.

The basic aim of each stage is to build a track from point A to point B (or as they are marked here 's' to 'e'.)  To do this you cycle through a variety of tile based track pieces each of which must be placed on the grid before the next becomes available. You are working against the clock to do this as, after a short count-down, your little train and its cargo will appear from the tunnel and begin following your tracks, if it hits anything on the way, including blank space then you will lose the game. Fortunately track pieces can be placed on top of redundant pieces to cover them up and, in fact, the game rewards you for not wasting pieces with extra points, as it does for getting your train (which can be sped up by holding down the 'A' button) to its destination in the quickest possible time.

While early stages are dull and lifeless and tempt you to turn off the system, things start to pick up from Stage 4. This is when the game's subtle twist kicks in and you realise that the objective is not simply to build a track from 'a' to 'b' but also to lay a minimum predetermined number of track pieces. indicated by a counter at the top of the screen. Build too short a path and you'll lose a life, so planning (as well as managing the short time-frame) becomes key. The game begins to throw all manner of hazards at you, such as trees and rocks that hinder your progress. However, as the levels progress, it also throws in tunnels, warps and passages that connect to alternate sides of the board (and give secret bonus points for using them) as well as a host of other forms of navigation, all of which need to be used prudently to keep ahead of your train's journey and use up the required number of track pieces (with further bonus points given for every extra piece of useful track used.)

To help you out, after every fifth stage the game gives you a bonus level where you must guide a wandering maintenance-man (who, in a further hint at a united Sachen-universe, may or may not be the hero from Pile Wonder) around a similar grid, making sure that the path you construct leads him to pick-up the different bonuses that lie scattered around the grid. Once collected these can be used at any point in future stages to do things like slow or freeze entirely the movement of your train.

After every tenth stage (not including bonus stages) you will enter the next 'world' and be given a simple image based password to continue. This provides both a good challenge and a handy way to continue a previous game. Although, sadly, these passwords reset any bonus items collected, the fact that you get to earn more at the midway point of each world is strong game design.

Strong game design is also something that inherently shines the more you progress in Railway. What starts out as a simplistic and fairly dull puzzle game quickly becomes something that will have you coming back for more and striving to earn that next password. It's a great example of a puzzle game not simply resting on increasingly complex versions of its early stages but constantly throwing new challenges at the player to keep them interested. A very real case of not judging a book (game) by its cover (early levels).

Even the music is pretty good. Toot-toot!