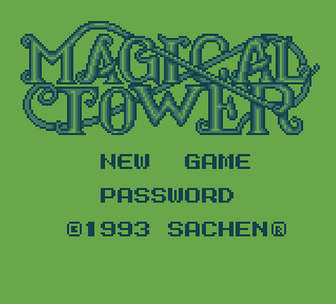 ​RELEASE DATE: 1993
It’s a story as old as time itself. You’re an evil wizard and you want to stop the resident do-gooder from entering your tower and putting an end to your nefarious schemes. You do the obvious and use your magic to turn him into a anthropomorphic hand. Then you remember that some time ago you also did the same to your entire band of minions, meaning that they are all now fatally prone to being defeated at a game of Rock Paper Scissors!

Thus begins Sachen’s improbably tale of high fantasy platforming and children's playground games. Rather less surprisingly, you don’t get to play as the wizard but the hand-shaped hero as he works his way up the Magic Tower to break the curse.

The games full name appears to be Magical Tower, something confirmed by both the title screen and the fact that it also received an unlicensed NES version with the same name. Like Many Mega Duck titles it also eventually recieved a Game Boy port. Blimey, it's almost a franchise. Steady on, Sachen!

While the screenshots below may seem uninspiring, the actual gameplay is surprisingly fun and strategic. Your hand begins each stage with an assigned setting, rock, paper or scissors and your task is to clear the stage of baddies. To do so, you simply bump into the one that your current pose would defeat in the real-life playground game of the same name. Doing so makes you change to a different pose that can then be used to take out other enemy hands. The task then is to avoid hands that can defeat you (causing instant death on contact) while bumping into those who are weak against you (paper covers rock, rock blunts scissors and scissors cut paper, for those who never had a childhood or played the original Alex Kidd before!).

​Power-ups can be collected to speed up, increase score or change your hand’s setting and a strategic Pac Man style game of cat and mouse ensues. While your character can jump he can only do so vertically to ascend platforms and cannot move while falling down gaps. Some strategy therefore comes into play in navigating the maze-like horizontally scrolling levels.

Thankfully, and especially given their propensity to include ridiculous numbers of stages, Sachen have opted to include a password feature. A new password is revealed after every four or five stages defeated and can be restarted with your full complement of 3 continues. This should ensure that the game is certainly beatable…presuming Sachen actually finished coding all the levels this time. We’ll get back to you if we manage to defeat it.

Music is jolly and varies between stages, eventually repeating every ten levels or so and the game is generally very enjoyable in its old school, minimalist, arcade style. Much like Duck Adventure (review coming soon), it’s a game that seems primitive but is actually solid addictive fun and well worth seeking out for your Mega Duck collection.