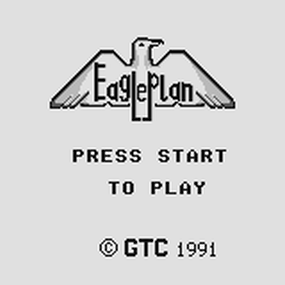 ​
Release date: 1991
Given that you can count the number of developers that worked on Supervision titles on roughly one hand it was a bit of a surprise to boot up Eagle plan and see two curious things in a matter of moments.
Firstly, the titular Supervision logo that normally scrolls upwards whenever you switch it on was, on this cartridge, replaced by it's less well known namesake 'Travellmate' (yes, they spelled it with two 'L's, I've no idea why either.)
Travellmate was the name bestowed on the Supervision in certain territories and Eagle Plan was the game bundled with that particular variant of the handheld. The developer, listed as GTC, was a bit more of a headscratcher. It turns out, after a little research that GTC, changed their name to the more familiar Bon Treasure; a name synonymous with a great number of Supervision titles...although sadly, less synonymous with quality.
What Bon Treasure did liked to do was rip-off existing properties with not much of a care for international copyright law. This could often produce mixed results in terms of gameplay.
Eagle Plan, later re-released on a 2-in1 cart with some corrected translation, was no exception to the former rule but was, thankfully, better than average when it came to the latter.

Eagle Plan, is, to all intents and purposes a clone of the Game Gear port of the Sega arcade game G-LOC with bits of the Mega Drive port randomly thrown in for good measure.
Planes need to be manoeuvered into your sites and shot down with your main gun, tanks require use of your heat-seeking missiles.
The gameplay sees you piloting a jet into battle and being tasked with destroying a specific number and type of enemy on each stage. The perspective is initially that of a flight sim. The dpad turns your craft or makes it rise and fall over an endless terrain of scrolling green lines that are distinguishable only as land or sea depending on what enemies can be spotted below. Flight is automatic and it's impossible to crash, the core gameplay comes from shooting down approaching enemy fighters with your cannon, intercepting their missiles and using your own limited supply of missiles to take out ground based enemies.

​While the game starts off with fairly generic front based assaults, things get a little more hairy when enemies start coming at you from the rear. This is where the radar on the bottom of the screen comes in handy and your task is to turn the plane to the extent that you move the dangerous blip into your gunsights where it can be seen and dispatched.
While these planes cannot shoot you with a gun, they can fire off missiles that, should they strike you, will diminish your steadily depleting fuel even further. When all your fuel is gone then it's game over.

To complete a stage you must register a set-number of kills given to you on the pre-mission briefing. If it were simply a matter of blasting a set number of planes then things would get boring rather quickly. Thankfully the game spices the challenge up a little with the introduction of land based targets. These come in the guise of tanks or ships that can only be destroyed by the limited number of heat-seeking missiles that you carry. the difficulty here comes in ensuring that the screen is clear of enemy planes before launching one of these missiles as the planes will draw the missiles away from your primary target, which will then require another pass to attack at a further waste of fuel.

Exactly as G-LOC did, the game provides a benefit to all of this with the inclusion of a mid-mission shop. Every mission rewards you with money that can then be spent upgrading your plane's weapons, shield or fuel capacity but, crucially, must also be used to replenish fuel and missiles used up during the previous mission.
The shop adds a good tactical element to the game, as you must decide what you will need often before seeing the mission briefing. Do you upgrade your fuel tanks for more in game 'health' but risk running short of missiles if you miss a target? Do you maximise your shields but leave your main weapon ineffective? Each of the three difficulty levels provides you with a different bank balance and even on 'beginner' you won't be able to splurge right away as you'll need to consider keeping something back for essentials.


Of course, none of this will be new to anyone who has played the Game Gear port of G-LOC, the shop screen, mission briefings, even the HUD have all been shamelessly ripped out of that game. More curiously, the third person mode from the Mega Drive version of the game also makes an appearance, although in an entirely different context, one that almost turns Eagle Plan into a different game.

Pressing the Select button during a game, switches you into an After Burner style viewpoint and completely removes the radar and hud from the game. It also completely changes the way you deal with enemies. No longer can you turn your craft to face them, instead the game plays more like a vertical shooter as you try to maneuver aroundenemies, shooting them from behind. This mode also makes aiming missiles significantly easier to the extent that it almost turns the game into a joke. Strangely, though, playing the game from this perspective, while a nice option to have, feels very unsatisfying, it removes all the tension that the cockpit view and radar navigation bring and makes the game less fun to play as a result. Thankfully, unlike it's inclusion in certain levels of the Megadrive version of G-LOC it's merely an optional extra here.

Obviously, being on the Supervision, the graphics have taken something of a hit. In Eagle Plan they can be said to be functional, if rather bland and repetitive, however nicely designed the overall presentation and HUD may be. The music, is tolerable and fairly decent and the sounds satisfying and meaty enough.

Eagle Plan is a strange one to score. It's such a blatant rip-off of another game as to be criminal, however it plays to the strengths of the Supervision with minimal ghosting and static screen action. It's fun and addictive in short bursts so is perfect for handheld play. It's nine stages and tactical decisions mean a decent challenge with a fairly strong amount of replayability.

In a sea of poor clones and abysmal shooters on the system, Eagle Plan manages to stand out from the crowd and should be one for any discerning Supervision collector to have on their radar.
Score 8/10
Back to SuperVision