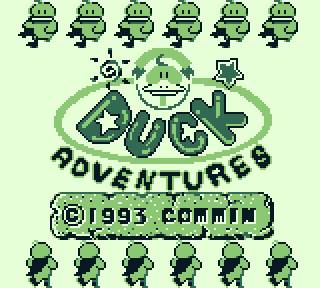 ​RELEASE DATE: 1993
All great systems need a mascot, or so the thinking was in 1993. Nintendo had Mario, Sega had Sonic and the cape wearing water fowl appearing in this game (as well as making cameo appearances in the 4-1 cart's title screen and as part of the logo for the German only Megaduck Lerncomputer) appears to have been the Mega Duck's attempt at creating it's own.
​We can only guess as to whether Sachen themselves were responsible for its creation or whether it was inserted into the games at the request of Timlex...but wait! We can do more than that! We can present you with what the dutch game manual has to say about the matter via the wonders of Google Translate!

"In the beginning the world of the duck consists of pure happiness. But one day the world is suddenly ruled by a devil who has four helpers. Now the duck wants to resist the devil to bring the world back full of happiness."

Well, that didn't really illuminate our hero's origin but that's okay as we can at least tell you where the game stole it's gameplay from. Duck Adventure is a pretty shameless clone of the old arcade game Wani Wani World, merely swapping out that game's reptilian hero for the Megaduck's own maybe-mascot. Fortunately, Wani Wani World was a fun little romp and Sachen have done a good job of porting across the basic gameplay.

You control you hammer wielding water fowl across 40 stages spread across 4 worlds with a boss fight waiting for you at the end of every world. Each stage is a single screen of ladders and platforms filled with meanies that must be destroyed to move on to the next. The main method of doing this is akin to that found in numerous Lode Runner clones: by digging what the manual, rather darkly but accurately, refers to as a 'grave' (facing any direction and pressing A). While the duck can fall through these holes to the platforms below, enemies become temporarily trapped as they try to excavate themselves and the duck must use this opportunity to bury them, sealing up the hole and turning the enemy into a collectable piece of food that can be picked up for bonus points. these include 'meat', 'honey', 'treasure', 'coins' and most disturbingly, given the protagonist, 'chicken legs'!

Duck Adventures certainly doesn't take any prisoners with its difficulty. 3 lives and no continues isn't much to get through 40 stages (plus boss fights) although the game does throw you some bonus collectables to aid your quest. You begin each level armed with a bomb (B button) that can be dropped and triggered by contact with an enemy. This is ideal when one is in hot pursuit of the player. Other collectables include extra lives, shoes to increase speed, pesticide (weirdly, letting you dig bigger holes), invincibility and even, according to the manual, a feather that lets the duck jump.

We say "according to the manual" because much of these treats are obfuscated by the previously mentioned difficulty. While the game starts out simple, it quickly starts adding new platform types such as metal blocks that can't be dug through, conveyor belts, teleporters and elevators to the mix. When you meet the first king sized boss it's a genuine moment of terror as you quickly realise that, with no clue about how to begin defeating him, your ten levels of progress are quickly going to end with a trip to the high score table and you are left to slog through it all again.

Of course, this is exactly the type of game that Duck Adventure is aiming to be: It's a pitch perfect rip-off of a game which was, itself, an old-school, Lode Runner/Rodland type affair, where victory is only expected by getting very good indeed! As such it would be harsh to criticise the mechanics at play here, even if it does feel like Sachen has been rather more forgiving in previous Mega Duck outings.

Graphically the game looks very nice indeed. Sachen can rarely be faulted for producing cutely sprites on the Mega Duck and here they deliver once more. While a little more musical variety would have been nice, the main theme is reasonable enough and the sound effects, while sparse, do their job.

Duck Adventure is a decent clone of a not particularly well remembered game, that takes most of it's mechanics from better ones. It's one of the harder to find Mega Duck titles but worth picking up if you're after an old school single screen platformer with a strong difficulty curve.