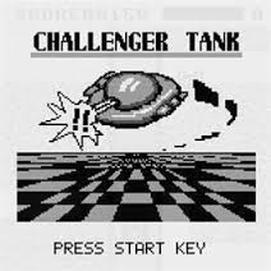 ​
Release date: 1992
Driving a real tank must surely be an exercise in frustration. Granted our only direct experience with this method of transport is riding through the streets of Russia in N64 Goldeneye but that was more than enough to induce tedium and frustration.
Tanks move slowly, they turn slower and their turrets rotate at speeds that you could probably run away from. As a result, they're something of a sitting duck, which is probably why they are designed to be so very hard to destroy.
​
Enter Watara; who decided it would be a great idea to make a game about a tank that captures all of the slow-motion problems with maneuverability with none of the defensive pluses.

You will die in Challenger Tank. You will die a lot.If you get very good, then you might make it to the first boss. Then you'll die.

An auto scrolling, vertical shooter, Challenger Tank sees you pilot the world's slowest moving combat vehicle , blasting waves of enemies with a turret that can be rotated through 360 degrees by holding down the B button. Enemies and roadblocks will try to hinder you on your way to the certain doom you face at the end of level boss and there is a nice feel to swiveling your turret and picking them off with a crisp diagonal shot.

This feeling of satisfaction lasts until they, in turn, fire off a volley of fire, rendered by the Supervision as the flickering ghost of a bullet, and you are blown up in a couple of hits by missiles you could barely see!
Enjoy these screenshots of level one.  We won't be bringing you screenshots of level 2 anytime soon!  That would first require making it that far!
As you progress, power-ups will sporadically appear. These can be blasted to cycle them through the various power-up options available. These include cannon upgrades, various spread shots and, perhaps most usefully, extra lives.  Annoyingly, however, if your tank is destroyed when one of these power-ups is on screen it will vanish.

Ultimately, however none of this matters as, even if you collect a boatload of lives on your trudge to the end of stage boss, it appears as though it is virtually impossible to beat him! It gets to the point where you wonder if later levels were actually coded (and given some of the tricks employed by other Supervision games, that isn't necessarily as unrealistic as it seems!)

Challenger Tank ought to be given credit for trying to do something new with the vertical Shmup format, unfortunately it's insanely broken difficulty setting means that it's impossible to objectively assess it as a full experience.

​Unfortunately all that remains is an exercise in frustration.

Score 4/10
Back to SuperVision