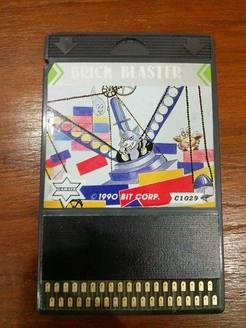 Release date: 1990
It's unclear why once extremely popular videogame genres tend to disappear almost entirely as the years roll by.

The scrolling beat-em up, for example, reached it's zenith in the 16-bit era and has never truly re-emerged or been reinvented in this age of ultra-realistic open world gameplay.

Similarly, the primitive, yet addictive, wall breaking exploits of Atari's Breakout and its many derivatives were at the forefront of gamer's minds for nearly two decades (aided by Taito's re-launching of the concept in 1986 with it's Arkanoid series)  before seemingly slipping from the public consciousness at some point in the early 2000's.

In the early 90's however, The bat n' ball genre was still beloved. Nintendo launched the Gameboy with its own take on the genre, the fairly dull and uninspired Alleyway. Sega's Game Gear got in on the action with...erm...Woody Pop and the equally oddly named Gamate rolled out not one but two bat and ballers in its short lifespan, the first being Brick Blaster.

(Left) A screenshot taken from the MESS emulator (Center) The weird wolf boss from level 10 (Right) The odd victory screen.
If you know anything about the Gamate's screen or you've read our review of Crystball for the Watara Supervision then you might have already guessed at where things might potentially go awry with such a title. However, before we discuss the inevitable, let's talk a little about what Brick Blaster offers.

The game loads up to a decent little ditty that, as usual, sounds lovely through stereo headphones and ear screechingly awful through the Gamate's external speakers. Sadly (or perhaps mercifully if you don't own headphones) there is no in game music beyond this point, so you are limited to mere beeps and boops as SFX during gameplay.

You are presented with two game modes from the main menu, these equate to a single player and 2 player mode, the latter of which simply involves handing the Gamate to the other player rather than making use of the seemingly never released Gamate link cable.

The gameplay is pure Breakout/Arkanoid. you move your little bat from left to right attempting to destroy all the breakable bricks in front of you with the ball. Death occurs if the ball travels behind you and rolls out of bounds. After 3 lives are depleted it's Game Over although the first 10 levels are selectable from the outset which allows for a limited continue system of sorts.

At varying intervals between levels you'll get a little fanfare and a victory screen of sorts with an odd little picture that appears to be prompting you to take a photograph. There are also enemies to avoid in the later stages and bosses to defeat, including a screen filling wolf and an Octopus that generates a multiball.

It's a pity that, these more interesting aspects seem to be hidden away in the games latter levels, with the only real variety in the first 9 being different scrolling patterns in the bricks themselves. It's a shame because by this point the difficulty has ramped up to such an extent that you'll struggle to see what they hold. Sadly, this difficulty comes about, not out of any gameplay design but because as the game throws extra enemy sprites at you, the gamate itself struggles to keep up and its ghosting turns the once clear ball into a barely visible, flickering mirage that can only be seen with the contrast turned to low, hampering visibility elsewhere.

There's also a feeling that Brick Blaster is far closer to Breakout than it is Arkanoid, with a distinct lack of power-ups sending things in a much more tedious direction than had become standard for the genre by this point in time.

As with the similarly named Bomb Blaster Bit Corp took a familiar genre that was hard to mess up and produced a competent if uninspired variant. Unfortunately, it was precisely this lack of innovation that ultimately meant that, like the bat and ball genre itself, the Gamate ultimately slipped from the public consciousness.

Brick Blaster is not a terrible game but, even for it's 1990 release date, it's a below par entry in the genre it represents.