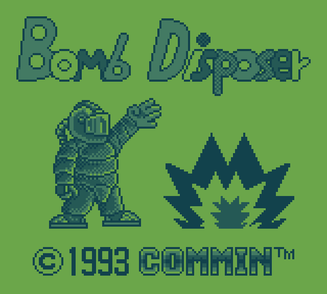 ​RELEASE DATE: 1993
"It's A.D. 3795 and the city of Tantullus has just ended a 15 year war. The buildings are still standing but they are full of unexploded mines placed by the enemy. You are Special Bomb Disposal Expert, code name Blue Diamond. Your mission is to destroy the enemy mines without destroying the building"

So goes the blurb from Bomb Disposer's manual which immediately produces some very Sachen-esque questions, the most notable being: Why are high-rise council estate flats still around in the year 3795. Why is the Bomb Disposer hurling bombs at mines instead of, you know, disposing them and, lastly, why does the building explode anyway when you complete a level?

Of course, seasoned followers of this website will know better than to expect anything other than mild befuddlement at some of Sachen's (here once again operating under their 'Commin' alias) design choices so we'll content ourselves with answering two more important conundrums: is this a Dr. Mario clone and is it any good?

Thankfully both questions can be answered in the affirmative.

The aim of Bomb Disposer is to eliminate the mines that lie randomly placed inside the building in three shades of Mega Duck green. Your little guy Blue Diamond will hurl twin coloured bombs that will fall down the screen and can then be rotated horizontally or vertically. Placing four similar colours or more together in a row, either horizontally or vertically, will eliminate the matching bombs/mines and cause any pieces on top to fall down to the next layer. the aim is to clear all the mines from the screen to progress to the next stage, of which there are 25 in total. A super Bomb that clears all colours of it's type can also be released by fulfilling on of several in game conditions listed in the manual.
You can opt to start at any level from 1-20 but later stages are a hellish nightmare requiring 80 or more blocks to be cleared and so only experts in the genre will likely be able to beat the game. The last five must be beaten consecutively to stand a chance of seeing the ending!

Graphically the game has no problems, everything is kept clear, simple and distinct although the game is obviously harder on the eye than it's colour inspiration. you are given a choice of two musical atrocities to listen to, both of which loop endlessly in ten second bursts and become quicker as the tension rises and the bombs begin to mount.
For some reason you can also opt to play the game at faster speed settings, although given the difficulty of later stages this seems an unnecessary option that few are likely to want to utilise.

Despite the extreme nature of the later stages, the game starts out easily enough and has a fairly paced difficulty curve. More importantly, its gameplay remains as addictive as the game it draws inspiration from.
​While the level select feature is a nice bonus to encourage picking up where you left off, it would have been nice to include some other variation of the game's core mode and because of that variety can be a downside.

As it stands, however, Bomb Disposer is a solid puzzle outing for the Mega Duck that won't blow anybody away, but will suck you in with its tight, one-more-go, gameplay.