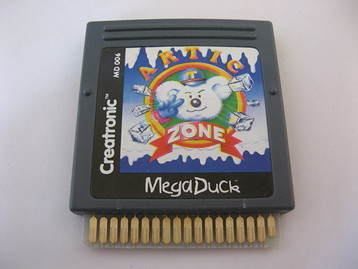 ​RELEASE DATE: 1993
The war to capture the handheld gaming market in the early 1990's didn't just give rise to failed Game Boy ripoffs like the Mega Duck. Even Creatronic weren't silly enough to think that just creating a stylized, slightly cheaper clone of an existing handheld sales behemoth would lead to profit overnight.

No, they also set developer Sachen to work trying to create a killer app for the platform. The Game Boy's killer app was, of course, the king of block based puzzlers: Tetris. You'd think, then, that Sachen would get to work creating a Tetris clone, right? Well, this is Sachen, were talking about (moonlighting here under their 'Commin' guise), so instead, they thought it a much better idea to rip-off an obscure Konami puzzler that few people have ever heard of.

Arctic Zone is, in essence the Konami puzzle/shooter hybrid 'Quarth'. The gameplay has been flipped to a horizontal perspective but it's essentially the same uninteresting premise and a rather bare bones experience at that.

You play as a polar bear (rendered in the game's official artwork as something more akin to an albino koala) who must fling block of ice (with the 'A' button) at advancing block patterns to make a perfect square or rectangular construction that will then vanish and be converted into points (and a piece of fruit that briefly flickers on-screen upon accomplishing this). The idea is to try and assemble large groups of rectangles at once to rack up a higher score. The bear can also throw up to 4 screen clearing emergency avalanches should things start to get hairy.
While Quarth interjected numerous powerups to keep it's gameplay interesting and varied, Arctic Zone is a real bare bones experience by comparison. There isn't even the obligatory hi-score table to be reset when you turn your Mega Duck off in boredom.
While an on-screen counter tracks your level and the game's music does make an attempt at signalling progress and danger by shifting tunes accordingly, there is never any real sense of tension or threat and when your one life expires and you realise that this is all it has to offer you'll wonder why you didn't spend your own playing something better...even if it's Beast Fighter!

Arctic Zone is merely one of those titles that simply exist. Its gameplay is perfectly fine in it's own way but it offers nothing new or interesting that would tempt the player back for more and is ultimately just as barren and lifeless as it's own setting.​